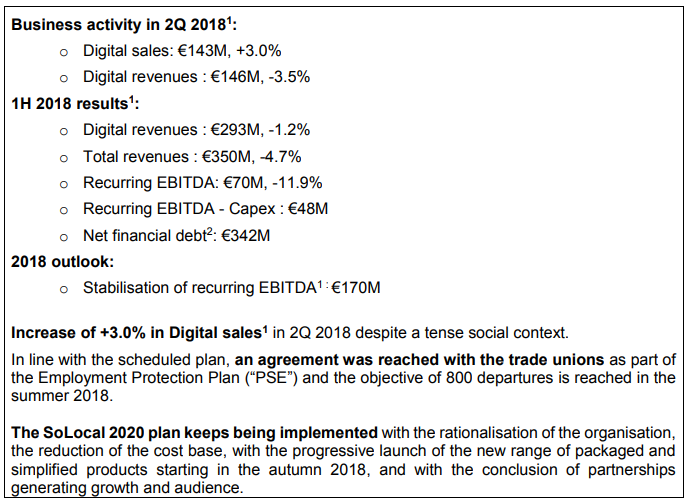 When releasing the 1H 2018 results as at June 30th 2018, Eric Boustouller, SoLocal’s Chief Executive Officer, declared: “Digital sales increased by +3% during 2Q 2018 despite a tense social context. During this period, we moved a step forward in the implementation of the “SoLocal 2020” transformation plan regarding the Company’s new organisational structure, thanks to the quality of the social dialogue and the responsible mindset of all stakeholders. The signature of four agreements with the main trade unions has enabled the implementation of voluntary departures as part of a mobility leave for about 700 people, allowing the Group to reach its 800 departures target as soon as this summer. 2018 marks a turning point for SoLocal, in order to achieve growth as soon as in 2019. During the 2H 2018, we will endeavour to maintain the sales dynamics by mobilising all the Company’s forces to benefit our customers. We will keep accelerating the implementation of our transformation plan, notably with the progressive launch (in a “test and learn” mode) of our new packaged and subscription-based offerings, and our new omnichannel sales organisation, which will be fully in place at the beginning of 2019.”

SoLocal focuses on continued activities vs. divested activities in the 1H 2018 results presentation, as well as in this press release. The financial performance indicators are commented within the scope of continued activities. The financial items presented in this press release for 1Q 2017, 1H 2017 and 1Q 2018 have been revised in light of the new scope of continued activities (after the disposal of certain assets, cf. Appendix I), new management rules under IFRS 15 regarding the Digital/Print sales breakdown, and the accounting restatement of a Digital/Print promotional offer. The accounting items for 2017 have been restated under IFRS 15.

The increase in Digital sales was driven by the success of our Presence products, Booster Contact offering and Websites, in particular the Premium websites. The decrease in Print sales is in line with the trend from previous years.

Staff expenses related to employees leaving, either as volunteers from July to September 2018, or as part of the reclassification phase in October/November 2018, will be accounted for in 2H 2018 as non-recurring costs from the date of the departure validation.

Recurring EBITDA1 amounted to €70 million in 1H 2018, representing a decrease of -11.9% compared with 1H 2017, as the decline in revenues1 was partially offset by a decrease in staff expenses1 .

Depreciation and amortisation expenses1 amounted to -€33 million in 1H 2018, an increase of +15.4% compared with 1H 2017, primarily due to the full depreciation of losses from previous years from divested activities of -€3.7 million.

Net income from continued activities amounted to -€80 million in 1H 2018, a decrease of €379 million compared with 1H 2017, primarily due to the restructuring costs related to the transformation plan.

Given the net income from divested activities is virtually equal to zero, the Group’s consolidated net income was -€80 million in 1H 2018.

The net change in working capital1 reached -€25 million as at June, 30th 2018 compared with -€17 million in 1H 2017. As announced, the management team is currently working on the implementation of a plan to improve the Group’s working capital, which is expected in 2019.

Furthermore, the Group continues to analyse its options for the refinancing of its indebtedness with the primary aim of reducing its cost. All financing instruments are being considered, including instruments potentially giving access to the equity of SoLocal, within the framework of the authorisations voted at the Shareholders Meeting of March, 9 th 2018.

The Group confirms for 2018 its outlook of stabilisation of recurring EBITDA1 : €170M.

IX- Next dates of the financial timetable

The next dates for the financial timetable are as follows:

Notes : 1 Scope of continued activities.
2 Net financial debt equals to total gross financial debt minus net cash and cash equivalents.
3 Potential contacts generated for professionals (customers and non-customers) ie. clicks showing the user’s intention to contact the professional or to visit its shop.
4 Order backlog equals to the outstanding portion of revenues still to be recognised as at June 30th 2018 from sales orders validated and engaged by our clients as at June, 30th 2018. Regarding evergreen contracts, only the current commitment period is taken into account.
5 Restated under IFRS 15.
6 Restated for the retrospective application of IAS 20 concerning the Crédit impôt recherche.
7 Net of bank overdrafts.

About SoLocal Group SoLocal Group aims to become the trusted and local digital partner supporting business companies to accelerate their growth. To succeed in this transformation, it relies on its six key assets some of them being unique in France: media with very high audiences, powerful geolocated data, scalable technological platforms, commercial coverage throughout France, privileged partnerships with GAFAM and numerous talents (experts in data, IT development, digital marketing, etc.). SoLocal Group's activities are structured around two axes. First, a range of "full web & apps" digital services on all devices (PCs, mobiles, tablets and personal assistants), offered in the form of packs and subscriptions, ("Digital Presence", "Digital Advertising", "Digital Website"," Digital Solutions" and "Print to Digital"), and integrating a digital coaching service, to support clients success. Second, flagship owned media (PagesJaunes and Mappy) used daily by Frenchs and offering an enriching and differentiating user experience. With more than 460,000 customers across France and 2.4 billion visits on its media, the Group generated revenues of €756 million (IAS 18) in 2017, 84% coming from Internet making it one of the leading European players in terms of online advertising revenue. SoLocal Group is listed on Euronext Paris (LOCAL). More information is available at www.solocalgroup.com.

I- Appendix I: Divested activities

1Q 2018 and 1Q 2017 sales, published on April, 24th 2018, were revised in light of the new scope of continued activities (following the disposal of some assets, notably Retail Explorer in 2Q 2018, cf. Appendix I) and new management rules under IFRS 15 regarding the sales breakdown between Digital and Print (as published on June 28th , 2018 in the press release “IFRS 15: a new revenue recognition accounting standard”).

The 1Q 2018 and 1Q 2017 revenues published on April, 24th 2018, were revised in light of the new scope of continued activities (following the disposal of some assets, notably Retail Explorer in 2Q 2018, cf. Appendix I), new management rules concerning the breakdown between Digital and Print under IFRS 15 (as published on June 28th , 2018 in the press release “IFRS 15: a new revenue recognition accounting standard”) and the accounting restatement concerning a Print/Digital promotional offer.

1H 2017 revenues were therefore impacted by the revision. 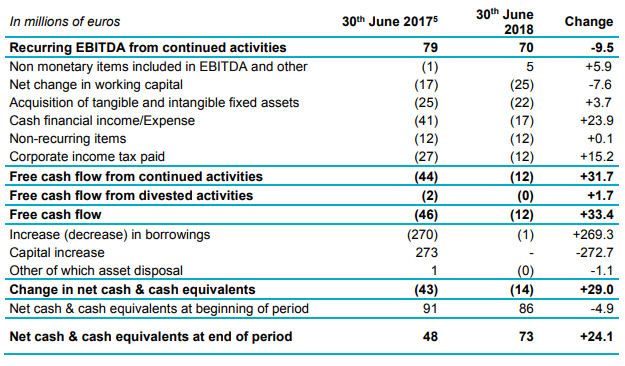 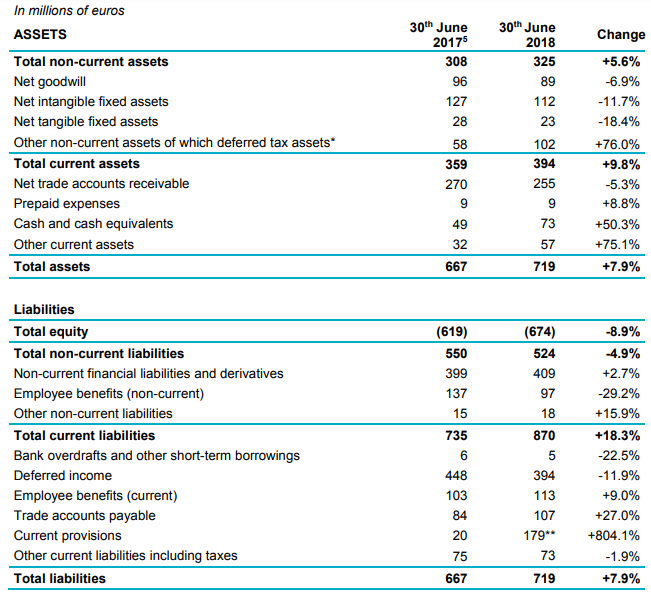